Temperatures have dropped here in eastern Kansas, off the Missouri and Platte Rivers. Morning temps are getting down to the high teens but we've had generally clear skies - so no snow yet.

Been having a problem with my Toyota Tundra. I had the shocks replaced about two months ago, but I am still having a suspension issues. Often when I drive over uneven pavement I hear a type of popping or low banging. I'm dropping the truck off tomorrow morning at a garage in town and I hope they identify and fix the problem.

I popped the first cap on the KC Ale this past Thursday. One word: Tasty! I was so happy with the results that I brought in a 12-pack to distribute to my small group at CGSC. We will see what kind of feed back I get tomorrow. The KC Ale batch has a great cooper color, medium head, slight hoppy aroma. The taste is crisp and smooth, no off-flavors.

The California Common batch went into secondary fermentation last Tuesday (18 NOV). I'll try to get it bottled up this coming Wednesday (26 NOV). Then it should be ready for a first by 11 DEC... a good day to celebrate my last night class for this term.

While the CGSC program here at Fort Leavenworth is considered a Masters-level program, it does not award a degree at graduation (unlike the Navy's program in Monterey or the Air Force in Alabama). Therefore, in order to get a masters, I signed up to take two night classes a week and then by graduation I'll get the degree. It is a bit of pain now, but this is really the only opportunity I am going to get to earn a master's degree.

Back to beer: I need to get crackin' and cook up the batch of Raspberry Wheat. If I am able to get it into primary fermentation today, I should be able to hit secondary fermentation by next Sunday (30 NOV) and then bottle by 14 DEC. It should be nice and tasty by New Year's Eve.

I need to put together a sample pack for my Team Jedi brethren (Team Jedi are the fine folks I spent my last year in Iraq with). So it looks like the pack will consist of ESB, KC Ale, California Common, and the Raspberry Wheat.

I've also had a request from the 7-land Inbound QSL Bureau back in Oregon. I received an email from Marc, NC7M, who let me know I had 200+ QSL cards headed my way. I need to also replenish my postal funds for the bureau. And next week - I will answer all the YI9MI QSL card request that I have... which is quite a significant pile.

KC Ale update: I racked the KC Ale to a carboy for secondary fermentation on 31 OCT. Last night I bottled it (finally figured out how to use the "wand" for filling the bottles). Bottling went well and the KC Ale should be ready to try by Thanksgiving.

California Common: cooked a batch last night. This recipe is suppose to be similar to Sierra Nevada... I've got high hopes. I'd like to get it to secondary fermentation by this weekend.

Next in line is a Raspberry Wheat - it is suppose to be similar to a version that is served at a local Leavenworth microbrew: The High Noon Saloon. After that, I've got a request for chocolate stout. That should be tasty.

Speaking of tasty... the ESB turned out pretty nice.

It took the KC Ale a while to start fermenting - I thought there might be something wrong. I had it in the fermenter on Saturday but didn't start seeing bubbles (i.e. the start of fermentation) in the airlock until Monday. Looks like it is progressing nicely now and I'll probably rack it to secondary fermentation Friday night.

I sampled one of the ESB bottles tonight. The ESB was cooked on 10 OCT, racked to secondary fermentation on 13 OCT and bottled on 18 OCT. It was pretty good, but I'm probably going to let it sit for another week. 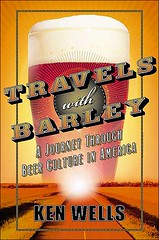 I started reading this book, by Ken Wells, on my Kindle. Great read that covers the history of beer - which I knew started in Iraq but ironically you are not allowed to drink it there now. The story follows beer to America, the development of the brewery system, the ascendancy of the big breweries, and the explosion of microbrews. The backdrop for the story is Ken Wells journey along the Mississippi River, from north to south, in his attempt to locate cool beer joints.

Wells even mentions the first recognized microbrew in the US - Bert Grant's place in Yakima, Washington. I've been there and was a big fan of Bert's brew. I think it is closed now and been replaced by the Yakima Craft Brewing Co. Grant's was a great pub with wonderful brew. Although my favorite Washington microbrew is the Ram Big Horn Brewing Company.

I'm really enjoying Ken's roadtrip but it's making me thirsty.

We had an offsite for class this morning at the Santa Fe Station in downtown Leavenworth, KS. Great breakfast and great discussion.

I've got the wort in the bucket, should be done with primary fermentation in a day or two. This was the first time I had a hydrometer and I need to figure out how to use it. I've got to get a good bottle count. I have about a dozen with the rubber seal and stopper. I think I may need to get new rubber seals.

I have to decide if I want to do a secondary fermentation with the carboy.

I turned on the HF rig briefly and heard stateside stations talking with a station on Guantanamo. Then I heard a familiar voice, K4STW, Stew in Virginia Beach. Stew probably doesn't remember me, but we chatted now and again on the 2M repeaters in Hampton Roads. It was great to hear his voice.

I got Ubuntu working with my Linksys print server. This will make my life much easier.

I hooked up my Morse key to my Icom IC-7000 and it appears to be working fine. Also hooked up an external speaker which is working nicely. I tried to connect my SM-20 microphone but realize now that a need a connector that I don't have. I don't want to hook up my Heil headset with the boom mike just yet. I was able to have a QSO with an Italian station and again with TI8II (Costa Rica), except on 20M this time.

More stuff I'm going to get done tomorrow:
- gather up my old (digital) logs
- back up my current Kansas log
- load up my YI9MI logs and prepare and organize the remaining received QSL cards
- order the adapter for the SM-20 mic
- find my weather station software
- have a CW QSO

I'm prepping to start a batch of homebrew beer. Tomorrow I'm going to start the process. Maybe have some fresh beer by Halloween?
Collapse